Jacques and Lelia share a love for the art of acting and a passion for guiding screen actors. This passion, along with the knowledge that they have gained through academic training and professional experiences, have lead to the creation of the Acting on Screen course.

The first Acting on Screen course was held in June 2013. It was a great success and has since been presented twice yearly. A follow-up course was soon developed and is presented once every year. Jacques and Lelia continuously shape the courses according to the valuable feedback from both participating actors and guest speakers. Acting on Screen is a platform for every actor to learn about him-/herself both as a human being and as an actor, to explore his/her love for the art of acting, and to optimise his/her own performance skills so that it may equal his/her potential. 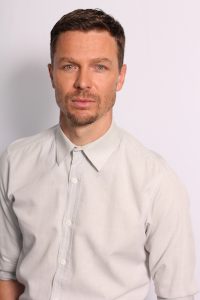 Award-winning actor, Jacques Bessenger, is best known for his role as Renier in the popular television drama series, Erfsondes. Renier is one of the main antagonists in the series and Jacques’ portrayal of this character has earned him a 2013 SAFTA nomination & ATKV Mediaveertjie award as Best Actor in a Drama Series. Although Jacques is praised for his ability to depict dark and sinister characters, he is also admired for the ease with which he portrays pleasant and heroic roles. Jacques received a NuMetro KykNET Silwerskerm award in 2012 for his portrayal as the courageous Robert McLachlan in the critically acclaimed film, Verraaiers. He also received a Tempo Award nomination as Actor of the Year for his work in Erfsondes and Verraaiers.

Jacques played Armand in the box office hit, Wolwedans in die Skemer (2012). He voiced the same part in the radio drama version of this thriller. He was also seen in the film Ordinary People. Other film credits include Ballade vir’n enkeling(2015), Sink(2016), Modder en Bloed(2016), Krotoa(2017) and Kanarie(2017).

Jacques ’professional television career began shortly after he completed his National Diploma in Drama in 2001. In 2002 he landed a leading role in the drama series Song vir Katryn on KykNET. More roles soon followed. Some of the most significant television series in which Jacques has starred include Erfsondes, Jozi Streets, Justice for All, House of Love, Thisa, Getroud met Rugby, Donkerland, Fluiters and Keeping Score. Jacques has also appeared in several popular South African soap series, such as 7de Laan, Villa Rosa and Binnelanders and in the daily drama, Isidingo where he played Dr Bertillon opposite reputable actors Mary-Anne Barlow and Robert Whitehead. International work include the miniseries, Madiba, and HBO’s Warrior.

Jacques’ talents are not only evident in front of the camera or behind a microphone, but also on stage. Jacques has been entertaining theatre audiences across the country for the past 10 years. He was a cast member of Kringe in ‘n Bos; he performed alongside Amanda Strydom in Chris Vosters’ Die Kabaret; he performed at the Grahamstown Arts Festival in plays such as Death by Numbers, The Zoo Story and The Quiet Violence of Dreams. Jacques performed in Die Afrikaner with Gys de Villiers; was seen in the controversial Dalliances; and portrayed the part of Reverend Paris and reverend Hayle in The Crucible which was nominated for an Naledi award for best production in 2011. Jacques portrayed the role of Josef in the musical Jesus die Musiekblyspel at the Pretoria State Theatre. His most recent theatre credits include New Foudland and Driving Miss Daisy, where he stars opposite Sandra Prinsloo and John Kani.

Apart from Jacques’ experience as a performer, he has also directed a number of theatre productions. He was the artistic director for the ACT/DALRO/NEDBANK Scholarship Finale (2010 – 2015). More directing projects include F.A.T for he Grahamstown Arts Festival, Fiona Coins’ Careful, Ligte Uit, Slaggat and Trek.

Jacques has presents several workshops on the craft of acting and is passionate about sharing his knowledge with others. He thoroughly enjoys the creative developmental process, whether on stage, backstage, in front of the camera or behind it. He is a versatile performer, an artist who is committed to his craft and a passionate entertainer and teacher. 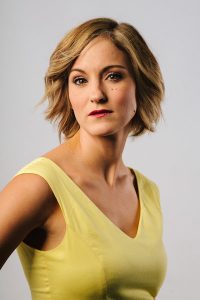 Lelia Etsebeth is best known to South African moviegoers as Liezl in the hit teenage comedy trilogy, Bakgat! (Cool!), Bakgat! 2 and Bakgat! 3, as well as for her role as Maggie in the thriller Wolwedans in die Skemer (Wolves dancing at Dusk). Lelia dazzled audiences in Bakgat! as an innocent blonde who dreams about getting married. This character is in stark contrast with the one Lelia portrayed in Wolwedans in die Skemer. In the latter, she delivers a performance as a shy, schizophrenic girl with dark secrets. Even though these two films showcase Lelia’s versatility as an actress, she has depicted many other characters on sreen.

In 2011 Lelia appeared as Saskia, a gutsy hair stylist, in the film Superhelde (Superheroes). She also played the leading role in the motion picture ‘n Saak van Geloof (A matter of belief) and was one of the pranksters in the films, Ek Joke Net! (Just Joking) and Ek Joke Net 2. Lelia is proud to be part of the cast of Molly en Wors: Die Movie (Molly and Wors: The Movie) which was screened in cinemas in October 2013. She played the role of an air hostess named Bokkie Botha. Lelia also starred in the sitcom Vir Beter of Baie Beter (For better or Much Better), in which she portrayed the same character as in Molly en Wors: Die Movie.

Television viewers initially got to know Lelia in her role as Lucy – a drug addicted teenager – in the drama series Erfsondes (Sins of our fathers). She also played in the popular series Getroud met Rugby (Married to Rugby) and in the programme The Last Say on Sunday. Lelia was seen as the character Magriet in Deon Opperman’s Television Drama, Donkerland (Dark country), as Steffie in P.G du Plessis’ Pandjieswinkel Stories (Pawnshop stories) and as Esther in the daily drama, Binneland.

Lelia loves working in front of the camera, yet remains passionate about theatre. From 2009 to 2012 she toured the country as one of the lead characters in acclaimed South African playwright Reza de Wet’s drama, Mis (Mist). In 2012 she shared the stage with South African theatre legends Tobie Cronjé and Hannes Muller in the farce, My Vrou se Man se Vrou (My Wife’s Husband’s Wife). Lelia wrote a one-woman show, Bokkie Botha, which she continued to perform at the Aardklop Arts Festival in 2013.

Radio listeners will recognise Lelia’s voice for her portrayal of a variety of characters in various Radio Dramas. Some of these include Ratels (Honey Badgers), Afsluiting (Ending), Dagboek van ‘n Wurm (Diary of a worm), Susters en Skandes (Sisters and Scandals), Wolwedans in die Skemer (Wolves dancing at dusk), Die Huis van Bernarda Alba (Bernarda Alba’s House) and the radio drama version of Mis (Mist). Children might recognise Lelia’s voice as that of the character Thombi in the Afrikaans version of the animation Kumba or as the princess in Die sneeukoningin (The snow queen).

Apart from her work as an actress, Lelia is also utilising her talents as casting director for feature films. She has been in charge of the casting of some of the most successful South African feature films and television programs. Among them are the box office hits Vir Altyd, Pad na jou Hart, Wolwedans in die Skemer, Hoofmeisie and the critically acclaimed Roepman and Donkerland.

When she is not in front or behind the camera, on stage or behind the microphone, Lelia is a part-time student and part-time lecturer. In 2012 she received her Masters degree in Drama from the Tshwane University of Technology and is currently completing her PhD in Drama. She teaches Film Acting and Radio Drama to Drama students at the University of Pretoria.